Our univers comes out from the rich legacy of the past embodied by the lineage of the kings of France, and it is now placed under the Head of the Royal House of France’s watchful eye Prince Henri of Orléans’s.

Descending directly from the Kings of Saint Louis, Henri IV and Louis XIII, the Maison d’Orléans is the dynastic heiress of the forty kings who made France. It perpetuates the conception of a “French art of living” blending authenticity and modernity, which rests on a vision apart from hedonistic pleasure, authentic and timeless.

Our brand goes hand in hand with Excellence and comes along with a name, a family, a history, a heritage…

Despite each of them had a different kind of relationship with the table ritual according to their respective tastes, they competed throughout centuries for the sumptuousness of the diners they used to hold. These banquets, either social or purely intimate, were seen as a mark of the monarch’s power.

From this tradition, both the world-renowned « Service à la Française » (French Service) and French gastronomy were born…and more generally, the « French Art of Living ». This tradition became the core of numerous trends to come, with an international influence for many luxury and prestigious products to be spread from Europe to Chinese Emperors and Russia, all the way through Middle-East.

The ambassadors on duty in France even got to speak very highly of them through their correspondences, be it official or private. Still today, often copied but never equaled, French products provide a benchmark for gourmets.

A « French Art of Living » that couples Authenticity and Modernity within some genuine and timeless hedonistic pleasure. A touch of Epicurism, a perfect blend of History and Beauty that insiders and lovers of exceptional products would appreciate…

Dare to discover fine products of rare quality, fondly prepared by lovers of Excellence and designed to make your senses travel through a world of elegance and delicacies.

A supplement of soul is breathed into our creations, the better to introduce you to our world of pleasures and surprising sweetnesses dedicated to a circle of insiders who cherish their common quest for excellence, and share the same values.

The spirit of Our Champagne is bounded to the long-standing tradition embodied by the Royal House of France.

THE ROYAL HOUSE OF FRANCE AND WINES….A LONG-STANDING TRADITION

Since the eleventh century in France, wines were to be found on the tables of the kings. They were whether from Burgundy or from Loire (were are located the castles of Blois, Chambord, Ambroise and Azay-le-Rideau that used to host the royal family). Some wines from the country of the Rhone and that of Navarre were not left aside. The splendour of the Court life and the refinement of culinary arts impacted on wines from Orléans, Touraine and Anjou.

In the 17th century, by the advent of Louis 14th, champagne got nicknamed « le vin des sacres » (« the wine of coronation of the Kings »). From this time on, it was never absent from the table of the Court.

The Champagne wines trade increased and spread thanks to a royal decree enacted on May 25th 1728.

According to this decree, Louis 15th authorized the shipping of sparkling wines into baskets of 50 to 100 pieces… Some kind of revolution !

As a matter of fact, formerly bottles were intended for local consumption, for they were too fragile to travel.

Both recent improvements in glassware (that improved the resistance of bottles) and the 1728 royal decree paved the way to a wide spread of wines over the borders of Champagne.

The nice time of the champagne was born! 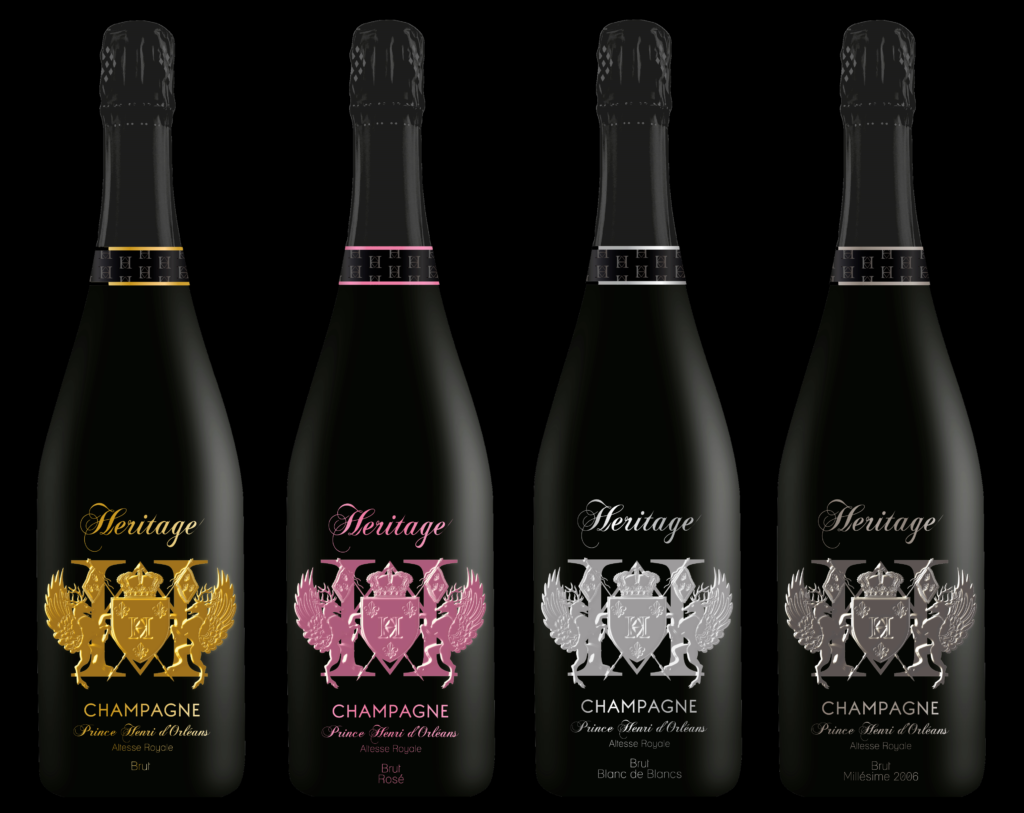 Champagne Prince Henri d’Orléans , Altesse Royale – Cuvée Heritage The cuvée Heritage is prepared with the utmost care by our winemaker/wine producer partners who contribute years after year to a high consistency in the quality of the blendings by dint of their mastery of vinification. The three Champagne varieties (Pinot Meunier, Pinot Noir, and Chardonnay) provide both unique and complementary characteristics to our wines: the Pinot Meunier gives roundness and the fruity aspect as well; as to the Pinot Noir, it gives body and power; and for the Chardonnay, it provides delicacy and vivacity. Our cuvée contains the tradition of the best champagnes full of characters, and the French art of living, and a decidedly modern vision altogether at the same time. A supplement of soul is breathed  into it, the better to introduce you to a world of pleasures, delicacies, and surprising sweetnesses, where Excellence is both a vocation and a pledge to a circle of insiders who share the same values. This cuvée excels on account of its different variations (Brut, Rosé, Millésime, Blanc de Blancs, Grands crus…), of its intensity, and of its rich flavour, and of its freshness and its elegant fineness, which provide the Champagne amateurs with a unique experience to be shared in a convivial moment, in a time of mere sparkling pleasure.

Each sip is a mouthful of Beautiful
Beauty and History!